The event was one of several sponsored by the Unified Government Parks and Recreation Department throughout the city.

The Leavenworth Road Association assisted by providing volunteers to staff the event and providing candy for the children. 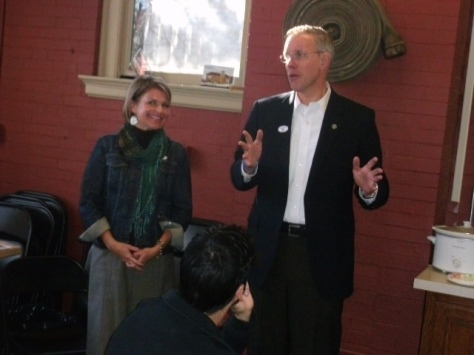 by William Crum
Paul Davis, the Democratic candidate for governor, came by the CHWC office Friday near 14th and Central in Kansas City, Kan., to meet local residents.

Every Friday a group of people from all walks of life get together for morning coffee at CHWC. At this coffee you don’t know who will show up, including local politicians and former mayors of the community. Davis came by to talk about the gubernatorial race in Kansas.

At the coffee he spoke about his emphasis on education and his plans regarding bringing new businesses to the state.

“I have a grassroots campaign, I really want to encourage education within the state,” he said. “I also plan to try to bring new businesses back to Kansas. My opponent, Gov. Sam Brownback, has while in office decreased spending on education and on top of that we as a state have lost a lot of businesses. In fact, according to recent statistics, Kansas is rated No. 45 regarding new business development in the state. I plan to turn that around, I can work with Democrats or Republicans, my track record shows that,” Davis said.

Former Mayor Joe Reardon, attending the event, said that this coming Saturday there will be a major campaign to encourage people to get out and vote. The event will be at the parking lot behind the Brotherhood Bank Building at 10th and Minnesota Avenue in Kansas City, Kan.

Also at the meeting was former Mayor Carol Marinovich.

The first hard freeze of the season is expected tonight, as colder temperatures move into the area.

Any sensitive vegetation left unprotected outdoors will die, according to the weather service.

Any sensitive animals normally left outside should be provided shelter for warmth.

On Saturday, expect frost before 10 a.m. The day will be sunny with a high near 50. Winds will be south southeast 5 to 10 mph in the morning.

Sunday’s forecast is mostly sunny with a high near 60. Winds will be from the south from 14 to 21 mph with gusts of 29 mph Sunday.

There is a 60 percent chance of rain Monday and 30 percent Tuesday.