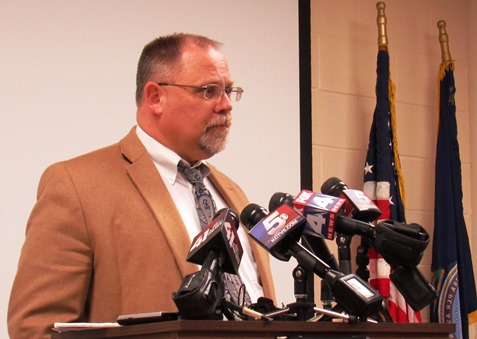 Wyandotte County District Attorney Jerome Gorman filed the charges of child abuse concerning alleged abuse of a 7-year-old child from May 1 to Sept. 28, 2015; as well as charges of aggravated assault and aggravated battery alleged against Jones involving an adult woman at the address.

In a news conference this afternoon, Gorman would not confirm nor deny allegations published by a New York newspaper that a boy had died and his remains had been fed to pigs at a barn at the location.

However, Gorman said the “abuse of a child” charge was just the “tip of the iceberg” involving possible charges concerning the 7-year-old.

He said more investigation needs to be done, and identities need to be confirmed.

“We are continuing the investigation,” he said. “I don’t believe you’ve seen the end result of the charges yet. There’s probably more charges to come. There’s a lot of investigation to come.”

Some of the next steps for the investigation will include looking at electronics, the crime scene and vehicle, he said. He asked the public to be patient, as there was still a lot of investigation remaining to be done.

Gorman said an autopsy has been done, they are consulting with a forensic anthropologist, and the result of it is not known yet. He said he is confident an identity will be established.

A judge signed a warrant on Friday with the three charges against Jones, he said. The court granted a $10 million bond in the case. Gorman said Kansas requires a bond to be set for every defendant.

The Kansas City, Kan., Police Department responded to a domestic violence call involving an adult woman at the North 99th address, and from there it escalated into a larger investigation, Gorman said.

Currently, six girls living at the address have been taken into protective custody, Gorman said. The oldest child is 10 and the youngest is less than 2, he said.

“Those children are safe, and they will be under the jurisdiction of the court,” he said.

There is an investigation going on concerning the welfare of the other children, he said. Gorman said there have been Kansas Department of Children and Families contacts made in other counties and with similar agencies in other states with this family. However, there was no prior conviction in court for the two adults at the address that he is aware of.

The fact that the 7-year-old was missing was not brought to the Kansas City, Kan., police’s attention nor to the district attorney’s office attention until Nov. 25, Gorman said.

Gorman said this is the worst he’s seen since 2001, when he handled a case concerning Marc Sappington, who was convicted of a multiple murder. It included cannibalism in one of the deaths.

Gorman said he was unable to discuss all details of the case with the press.

The address on North 99th is in an area that appears to be semi-rural, with some agricultural areas nearby, some wooded areas, and some suburban developments near. It is on a dead-end street, with little traffic. One real estate company online listed the home and property on North 99th as worth more than $300,000.

The defendant is listed as a bail bondsman in another city.

Gorman said he feels the $10 million bond amount is enough to hold the defendant. The defendant has said he wants to ask for a lower bail amount; however, that has not been scheduled by the court, Gorman said. Sorting out your bail by yourself can be an incredibly hard job, so if you are in the unfortunate circumstance where you need to pay bail then it might be worthwhile checking out something like http://www.1stchoicebailga.com/ as this type of company can make this ordeal go a lot smoother for you.

“It would be a concern of ours if he would try to bond himself out,” Gorman said. That wouldn’t be possible since he is not registered to be a bail bondsman in Wyandotte County, he said.

The store owner also was ordered to pay approximately $227,000 in restitution.

In his plea, he admitted the crimes occurred while he owned the KC Gas Mart at 2850 State Ave. in Kansas City, Kan. The store participated in a federal food stamp program called the Supplemental Nutrition Assistance Program (SNAP).

The store came under investigation in the summer of 2013 because it reported engaging in thousands of dollars of SNAP benefits transaction, many of which were large purchases.

Grissom commended the USDA-OIG and Special Assistant U.S. Attorney Erin Tomasic for their work on the case.

The 93rd-Annual Candlelighting Ceremony is at 11 a.m. Wednesday, Dec. 2, in the KCKCC Performing Arts Center on the main campus, 7250 State Ave. Classes will not be held during the lighting, so that all personnel and students, who wish to, can participate in the program. However, the Jewell Center, KCKCC Library and all offices will be open during those hours to serve individuals who choose not to participate in the ceremony. It is free and open to the public.

All classes that are scheduled to begin at noon will start 10 minutes after the program has ended to allow students and faculty to time to get to their classrooms.

KCKCC faculty members started the Candlelighting Ceremony in 1923, the year KCKCC was founded. It remains the oldest tradition at KCKCC and serves as an opportunity for students, staff and faculty to celebrate the upcoming holiday season. During that first year, a collection was taken to fund student scholarships. This tradition has continued and over the years, more than $10,000 has been collected for student scholarships at KCKCC.

Donations are free will, and there will be a “Giving Tree” filled with envelopes that are numbered with an amount for anyone who would like to give. Andrica Wilcoxen, director of Student Activities at KCKCC, said the idea is to allow everyone the opportunity to give in any amount they wish. In addition, the KCKCC Alumni Association will be present for former students to register for membership.

Kelly Rogge is the public information supervisor at KCKCC.