A fire was reported on Monday night near South 13th Terrace and Gibbs Road in Kansas City, Kan.

Two buildings were reportedly on fire. 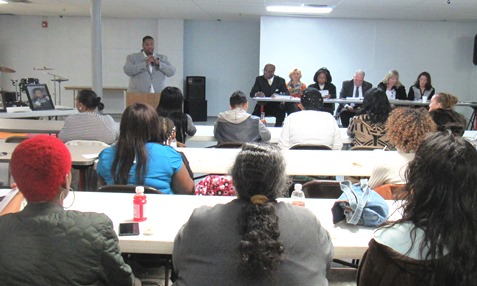 Several community residents spoke at the meeting, and told personal stories of how their children or grandchildren had been taken from their homes. Some of the residents said the children were placed in foster care homes that were worse than where they were before. There also were objections from the residents that the grandparents often were not being allowed to step up and take care of their grandchildren.

As one speaker told about his grandson being taken away, a member of the audience toward the back dabbed at tears in her eyes.

The residents used such words as “kidnapping” and “modern-day slavery” to describe children who were taken out of the homes.

Burroughs told the audience of about 50 persons that he had asked for a full audit of DCF, and he wanted to know why the regulations were implemented in a manner so ludicrous.

He said he was encouraged by the strong outcry about damage being done to families. He said the group must tell the message throughout the state and nation that, “Our children’s lives do matter.”

Panelists alleged that sometimes children were removed from homes without actual evidence, without due process, and sometimes only on suspicion. Also, they said there was a profit motive behind the more than 6,000 children removed from Kansas homes, in that agencies received more funding for taking children out of homes than leaving them there and working with the families, and that foster parents received payments for accepting the children.

Spanking was a topic that came up a couple of times, with some residents saying that they believed discipline was important. They all would have been removed from their homes as children if the same rules had been in place back then, a couple of residents said. Some residents attributed increased crime and violence to a lack of people disciplining their children.

One resident was dismayed at the idea that his mother, who had raised many children, would not be considered fit by the state to take care of a grandchild. He said she is a God-fearing, good person who attends church.

Panelists said residents may go to Topeka to protest on the steps of the Capitol, asking for better laws that allow children to remain with their families.

Patricia Madison, the panel coordinator, who is a grandmother who was trying to get custody of a grandchild, said that she had gathered about 1,000 signatures on a petition on the issue. She has worked with foster care agencies in the past.

She said her grandson was sent to foster care in 2012, and she told the subcontracting agency that she wanted the child placed in her care, and she was told they would not do it.

Madison also said she was told that if she went to the state legislators, they would adopt her grandson out.

Kathy Winters, with the Kansas Family Rights Coalition, said a law allowing grandparents to have custody needs to be rewritten to make grandparents’ rights stronger.

Jennifer Wynn of Wichita, a former independent candidate for governor, spoke at the meeting and said, “If you think it’s not about money, you’re mistaken.” The children have been targeted because they make money for people, she said.

Besides Burroughs, Sen. Pat Pettey, D-6th Dist., also attended the meeting. A U.S. Department of Justice mediator, whose job was not to investigate but to try to bring about better relationships in the community, was also in attendance.

Sen. Pettey said changes can’t be made overnight. It is important to have more information, she said. “If you want to be effective, you need to be involved, be voting and be concerned,” Sen. Pettey said. “Education is the key.”

Mary Martin, a Wyandotte County resident, was involved in helping to present the program, and Tarence Maddox, a former Unified Government commissioner, was the moderator for the panel discussion.

This issue has been brought before a legislative committee previously, and community meetings also have been held in the Wichita area. The issue also came up at the Wyandotte County legislative delegation meeting Jan. 5 at the West Wyandotte Library.

No one from DCF or subcontracting agencies spoke at the meeting on Feb. 29. The meeting had been publicized in advance as open to the public. In an earlier story by the Kansas Health Institute, the DCF spokesman said the number of children in foster care was growing because they were in the system for longer periods of time, not because more children were entering the system.

To see an earlier KHI story on this topic, visit http://www.wyandottedaily.com/legislators-may-ramp-up-scrutiny-of-foster-care-system/.

About 100 persons, mostly people who live near The Woodlands, attended a neighborhood meeting at Piper Middle School Saturday morning, Feb. 27, to learn of plans to reopen the pari-mutuel track.

Scott Beeler, a lawyer with Lathrop and Gage, an Overland Park firm, told the audience that Phil Ruffin, a billionaire casino owner, has purchased The Woodlands. Ruffin hopes for a change in state legislation that would provide a more favorable return on investment when the horse track would reopen.

I couldn’t help but speculate what might have happened had the previous track owners had been successful in getting slot machines a few years ago.

I recall several conversations I had with my friend and brother publisher Dick Clasen who was the editor of The Eureka (Kan.) Herald. Dick, who died in 2007, was very involved in his community, serving as secretary of the Greenwood County Fair Board. The Fair Board owned the Eureka Downs. Clasen was one of the main advocates for quarter horse racing at a track that traced its roots to 1872. Although its racing season was only for about a month, Eureka Downs meant much to the economy of the small community of about 3,000 people.

Eureka Downs had an up-and-down history after the Kansas Legislature approved pari-mutuel wagering in 1986. In 1988, Eureka Downs had an average attendance of nearly 1,800 persons; more than $1.65 million was waged. However, the track fell on hard times in succeeding years and was forced to declare bankruptcy in 1990.

Eureka Downs found new life when simulcast wagering was allowed at Kansas horse tracks in 1992. A horse benefit fund was created; a portion of revenue from larger tracks (including The Woodlands) subsidized smaller tracks such as Eureka Downs. Eureka Downs reopened in 1994 with these incentives. However, when The Woodlands shut down in 2008, this caused the benefit fund to become depleted. Eureka Downs closed in 2011 and a dispersal auction was held that year.

During this period I would visit with Clasen at newspaper conventions. We would compare notes about the pari-mutuel business in our respective communities. He expressed his frustration with Bill Grace who bought The Woodlands out of bankruptcy in 1998. Clasen told me there was an agreement two different times among the owners of greyhounds and thoroughbred and quarter horses about the division of revenue. Clasen said this would have allowed pari-mutuel tracks to operate profitably. However, Grace rejected both proposals.

Last year, State Sen. Steve Fitzgerald, R-5th Dist., was successful in getting a bill passed out of the Kansas Senate that would allow a more favorable division of revenue for pari-mutuel track owners. A key provision would allow the track operator to keep 64.5 percent of the revenue during the first two years and 60.5 percent thereafter. Present legislation allows track operators to keep only about 25 percent of track revenue; Beeler said this is not enough to be profitable.

Beeler said Ruffin has plans to either renovate or “bulldoze” the present buildings at The Woodlands. He said Ruffin plans for a 60-day horse season, but doesn’t have any immediate plans to race dogs. Ruffin also owns greyhound parks in Wichita and southeastern Kansas.

Ruffin was born in Potter County, Texas, near Amarillo in 1935. He created a chain of convenience stores and owns hotels. He bought the New Frontier Hotel and Casino in Las Vegas in 1998 and sold it in 2007 for $1.2 billion. He purchased the Treasure Island Hotel and Casino, also in Las Vegas, in 2009. He has a half-interest in Trump Tower with his friend Donald Trump; this is another Las Vegas property.

Beeler speculated that the improvements at The Woodlands could cost as much as $70 million. Beeler said that in addition to horse racing and slot machines, Ruffin would consider a live entertainment theater. Presently The Woodlands pays $193,350.46 in property taxes.

The Woodlands was built in the late 1980s and early 1990s; the owners, R.J. Hubbard and Richard Boushka, said their investment, including land, was about $68 million. The track did well during its early days. However, competition during the 1990s from casinos in nearby Missouri cities took a toll on The Woodlands.

Beeler urged those attending to contact their state representatives to encourage a yes vote on the legislation that would be favorable to The Woodlands. There is a companion bill in the Kansas House of Representatives that complements Sen. Fitzgerald’s bill.

The folks at Hollywood Casino next to the Kansas Speedway are actively opposing the reopening of The Woodlands. The casino is owned by Kansas Entertainment, a joint venture with Penn National Gaming and the International Speedway Corp. ISC also owns the Kansas Speedway. The Speedway received a 30-year property tax abatement; I once calculated that this was worth about $72 million.

Jeff Boerger, who was president of Kansas Speedway and is now president of Kansas Speedway Development Corp., appeared before the Bonner Springs Board of Education late last fall. Boerger said that although casinos have a lower tax rate, they were required to pay a $25 million “privilege” fee and make a minimum investment of $225 million. In addition, Boerger said, Hollywood Casino is required to donate about $4 million to charities annually. In practical terms, that “privilege” fee helps assure that the Hollywood Casino would have an exclusive franchise in northeast Kansas.

A full-page ad in The Kansas City Star Feb. 28 warned that if the Kansas Legislature passes the bill favoring The Woodlands, the state “could be breaching its contract with its current casino operators, requiring it to potentially pay out $100 million in penalties.” The ad goes on to oppose “special tax breaks for billionaire special interest.” The same message was on fliers left under windshields of those attending the Piper meeting.

Beeler was quick to deny that Ruffin would receive tax incentives. He also said that the endowment arm of The Woodlands would make contributions to charitable organizations as it did when The Woodlands was active.