The Lincoln Saltdogs jumped out to an early lead Thursday night and stopped the Kansas City T-Bones from recording their first sweep of the season, as Lincoln won 9-2 at Haymarket Park in Lincoln, Neb.

Lincoln scored in five of its eight at-bats in the game. That included the first inning when Curt Smith hit a two-run homerun off Kansas City starter Jordan Cooper that scored former T-Bones outfielder Robby Kuzdale, who led off the first with a walk. Kuzdale, in his first game for the Saltdogs since being released Tuesday by Kansas City, went one for four with two runs scored against his former team.

The Saltdogs added two more runs in the fifth inning. Leading 3-0 after Brandon Jacobs brought in Luis Alen with a sacrifice fly in the third, Jacobs knocked an RBI single that scored Smith, who singled earlier in the inning. The next batter, Jon Smith, lifted a sacrifice fly to left off Cooper that scored Rene Leveret. Cooper (2-2) gave up eight hits and five runs in 5 innings, and recorded his second straight loss.

Kansas City scattered six hits against Lincoln starter Shairon Martis (5-4), who didn’t allow any walks in his 7 innings, but the T-Bones didn’t get on the board until the seventh. Jake Blackwood led off the inning with a double — his ninth of the season — and scored on a single by Brandon Tierney.

The Saltdogs came back in the bottom of the seventh and all but put the game out of reach by scoring three runs off T-Bones reliever Brett Zawacki, who replaced Cooper in the sixth, and taking an 8-1 lead.

The T-Bones loaded the bases in the ninth when Blackwood, Tierney and Brett Wiley each singled — the second hit for each in the game. Blackwood scored on a sacrifice fly by Dalton Wheat for the second out of the inning but that’s the only run the T-Bones would get in the inning.

Kansas City (16-24), which won the first two games of this series, will begin a three-game homestand Friday night against St. Paul (28-13) at 7:05. Tickets are available by calling the Providence Medical Center Box Office at CommunityAmerica Ballpark at 913-328-5618. 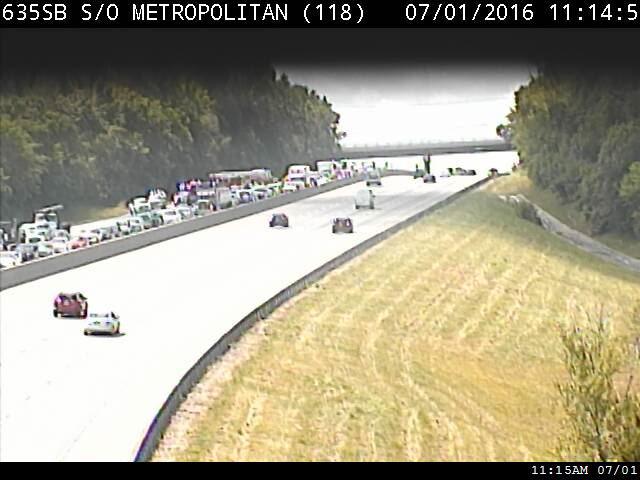 All lanes of northbound I-635 at Metropolitan Avenue in Kansas City, Kan., were closed at 11 a.m. today because of a motorcycle crash, according to the Kansas Department of Transportation.

Motorists were asked to avoid the area and use alternate routes. It was a fatal crash, according to authorities.

Secondary crashes have occurred in the I-635 and Metropolitan area, according to KDOT, and motorists are asked to avoid the area.

Kansas City, Kan., police are investigating a death in the 8000 block of Longview Avenue.

Officers were called to the residence about 3:10 a.m. July 1 and found a 26-year-old woman who was nonresponsive, a police spokesman said.

She was taken to a hospital, where she was confirmed dead, the spokesman said. The cause of death has not yet been determined, but appears to be suspicious, a police spokesman said.

The identity of the victim is being withheld until there is positive identification and family notification, police said.

The death is under investigation by the Kansas City, Kan., Police Department’s Major Case Unit, which is encouraging anyone with information to call the TIPS hotline at 816-474-TIPS.