Kansas City got late heroics in a 2-1 extra-inning pitchers’ duel win over Fargo-Moorhead on Wednesday night at Newman Outdoor Field in Fargo, N.D.

In top of the 11th, with the game tied at 1-1, Brett Wiley led off with a double against RedHawks reliever Will Mathis (2-5). Tyson Gillies laid down a sacrifice bunt that advanced Wiley to third. Two batters later, Dalton Wheat scored the go-ahead run with a single to right field.

Johnny Shuttlesworth started the 11th by allowing a lead-off single to Charlie Valerio. When Valerio found his way to third with two outs Shuttlesworth (2) forced Keury De La Cruz to groundout and end the game with the tying run 90 feet away.

Before their lead in the 11th, it’d been awhile since the T-Bones took their first lead in the second inning. Wheat doubled with one out and scored on back-to-back singles from Vladimir Frias and Ryan Retz, giving the T-Bones a 1-0 lead.

It was a lead Kansas City would hold until Fargo-Moorhead scored its lone run in the bottom of the seventh. Dustin Geiger led off with a double and then, after Brian Humphries moved him to third with a single, Geiger scored on a wild pitch.

Fargo starter Jose Almarante scattered five hits, one walk and one run over 8 innings. He recorded six of Fargo’s nine strikeouts in the game.

Kansas City pitchers forced a combined 13 strikeouts, including eight from starter Josh Hodges. Hodges allowed only five hits and one run in 6 1/3 innings.

Evan DeLuca entered in relief and tossed 1 2/3 innings with one hit no walks and three strikeouts. Mark Haynes continued his tear through the American Association by pitching two scoreless innings in the ninth and 10th.

Haynes (5-2) allowed the bases loaded in the ninth with the game tied at one, but struck out De La Cruz, ending the threat. Josh Mazzola led off the 10th with a walk and eventually found his way to third before Haynes forced Brian Humphries to pop out and keep the T-Bones’ hopes alive.

Kansas City (41-54) concludes the four-game series against Fargo-Moorhead (50-45) on Thursday afternoon at 12:30. All of the action can be heard at TBonesBaseball.com. 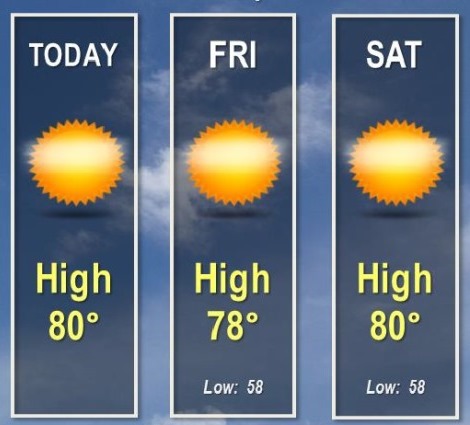 A dry and pleasant remainder of the week is expected with cooler temperatures, lower humidity and dry weather, according to the National Weather Service.

Chances for thunderstorms return Sunday into early next week, the weather service said.

Today, it will be sunny with a high near 79, according to the weather service.

Tonight, expect a low of 59, with an east wind of 7 mph, the weather service said.

Friday’s forecast is sunny with a high near 79, according to the weather service. Friday night, the low will be 60 with an east wind of 5 to 7 mph.

Saturday, skies will be mostly sunny with a high near 80, the weather service said. Saturday night, the low will be around 63.

Sunday, the high will be near 83 with mostly sunny skies, according to the weather service. Sunday night’s low will be around 71.

Monday, Labor Day, the high will be near 87, with mostly sunny skies, the weather service said. Monday night, the low will be around 73.

Tuesday, expect mostly sunny skies with a high near 88, according to the weather service.

A police spokesman said officers responded to a shooting at that location, and found a man deceased from an apparent gunshot wound lying in the street.

A preliminary investigation revealed that unknown suspects drove by and fired shots at the victim, striking him, the spokesman said.

The identity of the victim is being withheld until the family is notified.

The homicide is under investigation by the Kansas City, Kan., Police Department’s Major Case Unit, which is encouraging anyone with information to call the TIPS hotline at 816-474-TIPS.