According to the Kansas Highway Patrol trooper’s report, a Chevrolet Cavalier rear-ended a Honda Accord that had been stopped in traffic.

The driver of the Cavalier, a 19-year-old Kansas City, Kan., woman, was injured and taken to a hospital in Johnson County, according to the trooper’s report.

The driver of the Accord, a 28-year-old woman from Kansas City, Kan., also was injured and taken to a hospital in Johnson County, the trooper’s report stated.

A Wyandotte County man was sentenced to more than a year in prison after being convicted by a jury of Medicaid fraud-related charges, Kansas Attorney General Derek Schmidt said.

Brian Sloan, 49, was convicted by a Wyandotte County jury in September of one count of making a false claim to the Medicaid program and one count of theft.

Judge J. Dexter Burdette on Monday sentenced Sloan to 16 months to be served in the Kansas Department of Corrections and 12 months post-release supervision. Sloan is currently serving a prison sentence for an offender registration act violation and will complete that sentence before serving time in this case.

An investigation revealed that Sloan was hired as a personal care attendant and billed Medicaid for in home services to a bedridden, paraplegic beneficiary. He was charged with double billing the state Medicaid system because he billed Medicaid for services while the beneficiary was not in the home. The jury determined he could not have provided in home services because the beneficiary was out of the home and either in a hospital or in a rehabilitation facility. The jury found Sloan guilty of charging for services he did not provide and accepting payment for services not provided.

The crimes occurred between October 2010 and May 2011. The case was investigated by the attorney general’s Medicaid Fraud and Abuse Division. Assistant Attorney General Alma Heckler of Schmidt’s office prosecuted the case against Sloan. 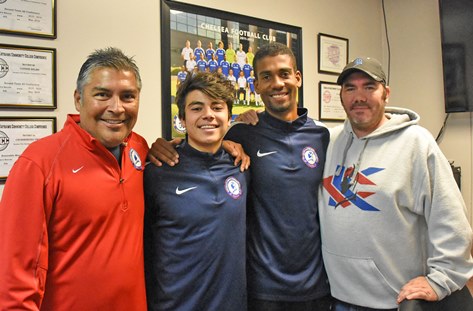 To say that Brazilians Hiago Gaspar and Ricardo Angelo had a major effect on Kansas City Kansas Community College would be an understatement – and vice versa.

Together, they along with five other all-conference honorees helped lead KCKCC to a 10-4 record and second place in the Jayhawk.

Just as impressive has been their success in ESOL classes and particularly learning the English language. Neither spoke a word of English when they arrived this summer.

The two also take part in the BOSS after school program in which they work with elementary students not only in learning soccer skills but on teaching life skills.

Both players are from Sao Paulo, Brazil, where they started playing soccer at early ages.

“Last year, we had two players from Brazil who were so successful academically and on the playing field and were also impressed with our college facilities, academics, athletics and coaching staff and were helpful in recruiting more students,” Rodriguez said. “We met Hiago and Ricardo on Skype and between our communication on Skype and watching them playing on video we thought they’d be a pretty good fit for KCKCC.”

Their arrival at KCKCC tops their list of highlights.

“The first day, everything was new for me, the language, practices, the college, the people,” Gaspar said.

“People were nice,” Angelo said. “And mainly the weather. It was hot. So much humidity.”

Both players started every game this fall.

“The competition is about the same as Brazil but the game is more physical here and we play more games,” Ricardo said.

“Hiago is pretty much a natural talent, a natural goal scorer,” Rodriguez said. “He’s usually in the right place a lot and you can’t teach that.”

“He also has great speed, probably in the 4.4 range,” Slusher added.

“Ricardo is very technical, is very good on and off the ball and has a high soccer IQ,” Rodriguez said.

“Very calm under pressure, good in the air and reads the game very well,” Slusher agreed.

Their talents have not gone unnoticed.

“I’ve already been contacted by some Division I schools and all the local NAIA schools,” Rodriguez said. “Their desire is to play at the next level, either in Division I or professionally. This has been our best year so far and we expect better next year. We have a bright future.”

Gaspar and Angelo plan to be a part of that future.

“We are so thankful for the opportunities we have here,” Gaspar said. “Everyone has been so helpful, all the teachers, the trainers and especially our coaches.”