Michael Ward Turner, a junior in electrical engineering from Kansas City, Kansas, has been named to the honors list for the fall semester at the Missouri University of Science and Technology, Rolla, Mo.

To be included on the honor list, students must have carried a minimum of 12 hours and had grade point averages of 3.2 or above out of a possible 4.0.

The Missouri University of Science and Technology was founded in 1870 as the University of Missouri School of Mines and Metallurgy. It has more than 8,800 students. 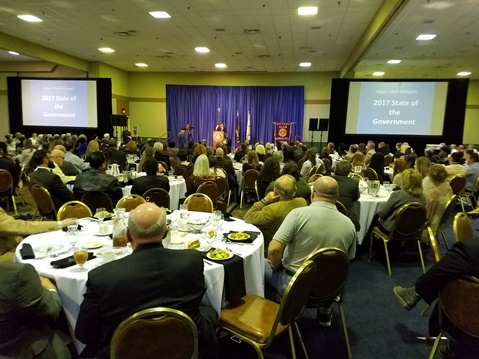 Mayor Mark Holland at his State of the Unified Government speech today pledged to reduce the city property tax to its lowest rate in 50 years.

The State of the UG speech was held at a meeting of the Downtown Rotary Club at the Reardon Convention Center. Mayor Holland discussed a 2 percent property tax decrease this year, following on the 2 percent decrease approved last year.

The mayor, who is running for re-election in the fall, also talked about a public safety review to promote safety, stability and fairness, and the recent contract with the firefighters’ union.

In addition he discussed the UG’s recent blight reduction program, that he said would improve 10,000 unfit or vacant properties by 2021.

The mayor also said he would continue efforts to make the UG more accessible and transparent with televised meetings, online open data portals and an easy-to-use online records request system.

“Our path to lower property taxes is clear, we will attract new growth and generate new sales revenue, and we will have the opportunity to continue cutting our taxes at a steady and responsible rate this year,” Mayor Holland said. “I’m pledging to work with the commission to reduce our city property tax to its lowest rate in 50 years.”

In his speech, the mayor also mentioned several new economic developments in Wyandotte County, including an Amazon distribution center under construction, the American Royal project, the Dairy Farmers of America project and the U.S. Soccer Training Center, as well as the downtown healthy campus project.

He cited economic savings that had been made through not farming out jail inmates to other counties, and also discussed mental health initiatives that save the county money.

The mayor also advocated for programs such as Medicaid extension and the Affordable Care Act, which he said helped thousands of Wyandotte County residents.

When the Kansas Speedway opened in 2001, it was the cornerstone for development in an area that was to become Village West. The International Speedway Corp. had decided to come to western Wyandotte in 1997 and build a $240 million tri-oval superspeedway that would attract the major leagues of auto racing.

Race fans scrambled to get seats and shelled out license fees to assure that future seats would be available. Top stock and Indy car drivers came to the Kansas Speedway. Sweltering summer heat over the Fourth of July weekend didn’t deter fans.

Fast-forward to 2017. Indy cars no longer race at the Kansas Speedway; however, a second race with top stock car drivers was added. The sport was hurt by the Great Recession as many of the fans were working-class blue-collar folks.

A front page story in the Feb. 21 issue of The Wall Street Journal told of the problems that NASCAR has had and still faces. Television viewership is down some 45 percent when compared to a peak in 2005 according to The Journal. The Kansas Speedway no longer sells out.

Part of the problem is that many of the typical NASCAR fans are getting older. And the millennial of today (19 to 34 years old) may be a race fan, but could be content to watch the race on a mobile device.

Stock car racing has its roots in the Southern United States where tales of good ol’ boy racecar drivers learned their craft hauling moonshine and outrunning revenue agents. It was Bill France Sr., who operated a gas station on Daytona Beach, Fla., who was the godfather of NASCAR. He was the one who established to original racing rules. But today, NASCAR is a very sophisticated business—and that may be what has turned off some fans. The France grandchildren manage ISC and NASCAR.

The Kansas Speedway was part of a national expansion of stock car racing which included tracks in the Los Angeles, Chicago and Dallas-Ft. Worth markets.

One of the major reasons that ISC came to Kansas City, Kansas, was the good deal it received from state and local officials. The track received a 30-year abatement on property—the only such benefit ever granted in Kansas. That was worth about $70 million. In addition, the track received the use of Sales Tax Revenue (STAR) bonds to pay for infrastructure. That was worth about another $10 million. However, the Speedway accounts for $243 million annually to the area’s economy according to an interview with Pat Warren, the Speedway president, in May of 2016.

Another major factor in choosing the Wyandotte County site was the intersection of I-435 and I-70 that provides relatively easy access for motorists with a minimum of stacking compared to older tracks such as Talladega in Alabama.

The Kansas Speedway has been the linchpin for development in Village West including Legends Outlet and the Plaza at the Speedway. The area now is responsible for about $25 million annually in property and sales tax. But talk to the typical business in Legends Outlet and they will tell you that their businesses suffer during race weekends. People stay away from the area because they don’t want to get tangled up in race-fan traffic. The truth is that it is one of the best times to shop at the Legends.

Although television viewers and ticket sales to NASCAR events may be down, a new race format and point system for 2017 may make a difference, according to an article in espn.com. The race is broken down into three phases in which drivers can earn points.

The NASCAR season started this last weekend at Daytona. The Kansas Speedway will hold NASCAR races May 12-13.