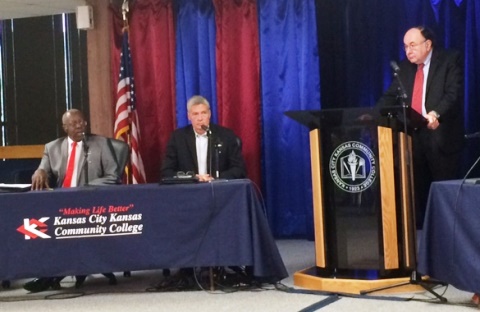 Democrat Nathaniel McLaughlin and Republican Greg Goode had very different views of what to do about national issues. Incumbent Rep. Kevin Yoder, a Republican, and another Democratic challenger, Jay Sidie, did not attend the forum. Chuck Schlittler asked the questions of the 3rd District candidates. The forum was sponsored by Business West, neighborhood business organizations and KCKCC.

As the campaign winds down toward primary election day Aug. 2, the Center for Responsive Politics (www.opensecrets.org) reported that incumbent Rep. Yoder had a huge lead in funds raised, with $1.9 million to the next highest candidate, Jay Sidie, who reported $113,332 as of July 13. Candidate Goode reported $31,840 while McLaughlin reported raising $14,989.

McLaughlin, a resident of Kansas City, Kan., said at the forum that he wants to assure America remains second to none in gross national output, education, health and defense.

“I will not automatically be an adversary to those on the opposite aisle,” he said, as no one party is always right or wrong. However, he would not bend on his principles, he added.

On the issue of gun control, he said he would use the Supreme Court Heller decision to take the military-style weapons off the streets.

Clean energy is a focus, he said, and it and sustainability will ensure a healthy population.

He said he would use his business knowledge from the real estate business to bring issues to the table that small business owners will face, including overtime, minimum wage and workers compensation in 2017.

Greg Goode, a retired U.S. Army lieutenant colonel who lives in Louisburg, Kan., said, “The voters have not had a choice since 2010,” he said. “The voters deserve a choice.”

He said the current establishment was dominated by career politicians who have spent the nation into a debt of $19 billion.

He said he is walking door to door every day, and intends to give the voters in Wyandotte County a voice in Washington, D.C.

Goode said his top issue would be to “stop the insane spending.” His second top issue is pro-life, he said. He is against abortion and also supports pro-life issues for the elderly.

McLaughlin said he believes the federal government should only do those things that it has been given authority to do. He also said it was very important for every citizen to have fair and equal access to the voting booth.

McLaughlin is a proponent of securing the borders, and he also said he believes undocumented immigrants who are already in America should have a fair path to citizenship. “I would not be talking about building a wall or breaking up families,” he said.

Goode said the border between East and West Germany was controlled for 50 years, and America could control its border to the south with Mexico.

While community and state policing is a state duty, not a federal government responsibility, McLaughlin said programs could be developed at the federal level that would encourage communities to talk to each other. He said he had been very encouraged to communicate often with a command officer on the police force.

“We need straight talk from our leaders because these professionals do put their lives on the line every day,” McLaughlin said.

He said if America can send its military experts overseas to train third world countries to fight, it certainly ought to be able to send its experts from the FBI to help train the local police.

Goode said the Dallas and other police tragedies were a loss, not a policy discussion about Second Amendment rights. “It is a loss that fathers, sons, mothers, entire communities need to deal with,” he said.

“At the federal level, I am very concerned about the overreach of the federal government when we created Homeland Security, we created a military-style force,” he said. “That is very threatening to a lot of our citizens.”

He said the mental health programs in Kansas need to be fixed to stop an increase in incidents and the prison population.

Goode said laws in America are based on Judeo-Christian values. “When we threw out the Ten Commandments, the Bibles out of school, what do these kids have to hold onto that say ‘thou shalt not kill,’” he asked. “I don’t know how to get that back into the community.”

And Goode added, “If you want to be an immigrant in this country, subscribe to this culture.”

On the topic of trade, Goode believes that the Trade Partnership with the Pacific would give away America’s national sovereignty, cost America jobs and its way of life.

“You’re not going to be able to fight in the global economy,” he said. He said workers here would not be able to compete with workers making $1.50 an hour in other countries. “You can’t compete with a government that’s cutting deals.”

McLaughlin said the wheels need to be put back on the broken wagon called the federal budget.

He said he would work with both parties and with the White House to have a zero-based approach to the budget.

McLaughlin said Social Security, programs for senior citizens, education and the military should be spared budget cuts, but all other departments should be cut 1 percent annually for eight years.

He also wanted each country that gets financial aid from America to justify its spending.

He said he believes in a fiscal program similar to the one Bill Clinton took, which McLaughlin believes would jump-start the economy.

Goode said he was in favor of cutting the size of the government. As an example, he said money was recently proposed for the National Institutes of Health to fight the Zika virus, and to do other research. But research is already being done privately in the pharmaceutical industry, and federal dollars are not needed for the NIH to do the same thing, he believes.

McLaughlin said he would be in favor of looking at labor, overhead costs and unnecessary spending to achieve savings. He said each department should be evaluated to see where it is spending money for unnecessary travel, leases that should have expired a long time ago, and how many employees are being carried that are not meeting performance. In foreign aid, “we cannot be big brother to every country on this planet,” he said.

Tax breaks that are given to farmers who grow potatoes and to corporations are entitlements, he said. He said he would approach this from a business mentality, and he favored a zero-based budget, where funds would only be spent if they need to be spent, and they are not given away. At the same time, he would protect senior citizens, veterans and make sure there is an educated population. “Everything else is on the table,” he said.

McLaughlin said Goode and he had a point in common – the Beltway will not be happy if they are elected.

“My first obligation is to the citizens of the 3rd District of Kansas,” he said. He added he wants to stay close to the people.

The forum is being shown on KCKCC’s cable television station and also is on YouTube. To see a schedule, visit http://www.wyandottedaily.com/candidate-forum-to-be-shown-on-kckcc-cable-channel-2/.

For more information on the candidates for the 3rd District, see: