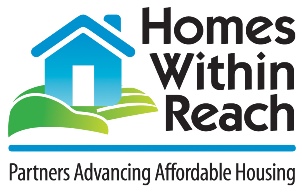 Modeled on best practices adopted in other states, Homes Within Reach is being launched across Kansas to help social service agencies and community groups use housing as a primary intervention for persons with mental illness or related disabilities.

“There is mounting evidence that addressing a person’s most basic needs, such as housing, before providing mental health or substance abuse interventions is a critical and resource-saving first step,” said James Glenn, executive director, Kim Wilson Housing . “HWR’s mission is to help social  service agencies better steward limited resources by making safe, desirable and affordable permanent housing a first step in the recovery process and not a reward to be collected upon psychiatric stabilization or sobriety.”

HWR has three goals in support of its mission:

•         To increase the number of housing options statewide specifically for persons with mental illness or substance use disorders.

•         To document successes by collecting accurate qualitative and quantitative data.

Of the 45,500 Kansans with disabilities receiving Supplemental Security Income in 2012, between 64 to 78 percent of their monthly SSI income of $698, on average, was spent on rent.

“This is far beyond the 30 percent of income affordability rate projected by HUD for rent and utilities,” said Christy McMurphy, KWH director of housing strategies, eastern and central Kansas, who is providing staff support to the new HWR initiative. “This housing affordability gap leaves many people at risk of becoming homeless or without sufficient income for basic necessities like food, transportation or medication,” McMurphy added.

“Having a place to call ‘home’ begins the process of healing and is the cornerstone of recovery,” said Michael Kress, senior director of housing and facilities, Mental Health Association of South Central Kansas. “Homes Within Reach will facilitate our ability to serve as a resource to help other mental health and substance use disorder agencies develop housing strategies based on a unified vision and action plan to advance quality affordable housing.”

•         Development of housing strategies and plans for individual or collaborating agencies or a community.

“HWR will focus on identifying special housing needs among persons with behavioral health problems and related disabilities throughout Kansas, and then work to streamline their access to existing permanent supportive housing in their communities,” said Brad Schmidt, director of housing, Prairie View Inc.

McMurphy explained that this statewide initiative is a compilation of successful and time-tested campaigns and initiatives across the country.

“These models have demonstrated dramatic, continued success even during the recession,” McMurphy said. “With the exception of Stand Up to Cancer, these initiatives have led to a significant reduction of homelessness, unnecessary hospitalizations, criminal behaviors and interactions with law enforcement.  Stand Up to Cancer’s mission is to unite in one unstoppable movement to end all kinds of cancer, and this business structure is what we want to adapt to end homelessness.  We believe our collective efforts through Homes Within Reach can achieve this objective.” 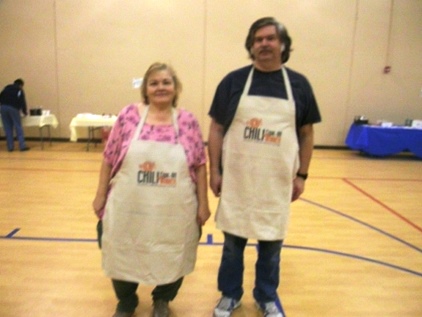 A chili cookoff last week raised funds for a scholarship program for the homeless.

Ten teams competed for the honors of best chili. All the proceeds went to help the Milla Massey Scholarship Program, developed to help homeless children in this community.

The scholarship helps the children buy books and other items to further their education.

According to Housing and Urban Development, a person who is homeless does not have a home at all – meaning they do not have a place to go. However, there are unreported homeless people who stay with family and friends and do not have a permanent residence, according to persons who work with the homeless in this community.

Many homeless children in this community are staying with friends or family, without a permanent residence. Some children come to school not knowing where their next meal will come from.

This scholarship program gives them hope, according to its organizers. Even though the scholarship amount is small, it will help pay for some books to help them further their education.

As a judge I had the honor of tasting some of the best chili ever in my culinary career at this contest, making it very hard to select a winner.

Participation was from many areas, including the Kansas City, Kansas Public Schools and the Moose Lodge.

Organizers plan to hold this fundraising event again next year.

For more information on how to participate or donate to this program, contact Amy Thomas, coordinator, Wyandotte County Homeless Services Coalition, 701 N. 7th St., Room 823, in Kansas City, Kan. Her telephone number is 913-573-5120 or go to the website, www.wycohsc.org.

This week was fairly quiet under the dome as we came back into session on Wednesday after a long weekend to refresh after Turnaround. We had no general orders on Wednesday, voted on two bills on Thursday, and had a “pro forma” Friday, meaning that there was no real session.

The event of the week, and perhaps the event of the session, came 9:30 Friday morning when the Kansas Supreme Court published its ruling in the case of Gannon vs. State, otherwise known as the school finance case.

The ruling by the Supreme Court is sure to set the stage for the rest of the session, and I will be sure to keep you updated as I learn more. This issue is a top priority for me, because I believe it is time that our schools were fairly and adequately funded.

The Appropriations Committee met on Thursday, March 6, to hear budget reports on a variety of agencies. These agencies included the Revisor of Statutes, the Legislature, the Division of Post Audit, the Judicial Council, the Kansas Lottery and the Kansas Racing and Gaming Commission.

During the budget hearing for the Division of Post Audit, the committee discussed increasing the budget in the Post Audit Committee to make it possible for them conduct more audits.

The committee is requesting additional funding for a new three-person auditor team that could conduct more audits as requested by representatives. The three person team would cost approximately $250,000 the first year and $240,000 each subsequent year. The committee praised the work the auditors do, and the committee approved the Post Audit budgets for fiscal years 2014 and 2015.

The committee discussed the possibility of decreasing the budget for the Judicial Council, specifically by decreasing the amount of money spent on salaries within the department. The proposed cut would come out of the executive director’s salary, but the committee ultimately decided to get a report from the board that explained the reasoning for current salary levels before making any decisions.

The committee passed the Kansas Lottery budget as is for fiscal years 2014 and 2015, and it approved a $22,000 increase in funding for the 2014 Kansas Racing and Gaming Commission budget.

A joint meeting of the House and Senate Education Committees was held to get answers to a set of questions posed by committee members.

Deputy Commissioner of Education Dale Dennis provided the committee with reams of data regarding school spending, the history of school finance since 1992, legislative changes in that time period in the funding formula and much more.

He was followed by Craig Neuenswander of the Kansas Department of Education who filled the committee in on how at-risk money is generated and then how it is spent on moving kids to higher levels of achievement.

Neuenswander also provided data showing changes in the gap between low income students and others over time. While the gap had been shrinking slowly for years, it has widened a bit in the past year.

Dave Trabert of the Kansas Policy Institute also spoke on school finance. Trabert claims that when it comes to education, money doesn’t matter, most kids are doing poorly, and schools are inefficient and have been hiring too many people. Trabert also called for a new cost study.

A Senate bill that aims to increase the transparency and accountability of representatives in the Capitol made its way to the House this week. SB 413, also known as the Transparency Act, was introduced to the Appropriations Committee on Thursday, March 6.

The Transparency Act would require audio and video streaming in the four largest committee rooms here at the Statehouse. Cameras would be set up in rooms that hold the committees on budget, education, judiciary and commerce, and federal and state affairs.

The bill aims to make it easier for constituents to see their representatives in action, and allow Kansans, especially those who can’t make it to Topeka, to get more involved in the democratic process.

Senate Minority Leader Anthony Hensley endorsed a two-year trial run, with the hopes of its success leading to a full-blown program.

Proponents of the bill find it to be worthy of its $188,000 a year price tag; saying that transparency for citizens costs a lot of money, but it is an important investment.

Opponents of the bill say that political theater is an inherent part of committee meetings and events that take place on the floor, and having cameras will only enhance the showboating by legislators. Opponents also worry that with all the videos available to citizens, some may take bits and pieces of the footage and negatively twist it and then post it on social media.

Kansas is one of only three states that permit audio-only streaming from the House or Senate floor.

On Friday morning, the Kansas Supreme Court released its long awaited ruling in the Gannon vs. State case, which challenged the constitutionality of the level of public school funding by the state.

The ruling stated in part what we expected: the Kansas Legislature has failed to equitably finance K-12 public schools.

A deadline was established for July 1 for executive and legislative branches to agree on measures to fully fund capital outlay and supplemental aid provisions, also known as the local equalization fund, to the tune of $129.1 million.

This money is aimed in great part at offsetting the difference between property-rich and property-poor school districts. If we fail to meet this deadline, the district court will take action as “it deems appropriate” in order to correct the inequities.

The issue of adequacy, however, was sent back to the Shawnee County District Court. Whether we are “adequately” funding our schools or not will be determined by several criteria, including what is known as the Rose Standards.

This means that we will most likely be waiting several months more before  any ruling is dropped on the adequacy component.

The ruling is a whopping 110 pages, which I am currently studying closely so that I may better understand what is at stake. What the Kansas Supreme Court made clear is that we have not met our obligation to fund our schools in an equitable way. The task at hand is a daunting one, as we’ll have to find a way to equitably fund our schools after Gov. Brownback proposed and passed the largest cuts to education in state history. The complete ruling can be found online – http://www.kscourts.org/Cases-and-Opinions/Opinions/SupCt/2014/20140307/109335.pdf

It is a special honor to serve as your representative. I value and need your input on the various issues facing state government in order to better serve my district and this state. Please feel free to contact me with your comments and questions. My office address is Room 561W, 300 SW 10th St Topeka KS, 66612. You can reach me at 785-296-7648 or call the legislative hotline at 1-800-432-3924 to leave a message for me. Additionally, you can email me at stan.frownfelter@ks.house.gov. You can also follow the legislative session online and find many useful resources at www.kslegisture.org.