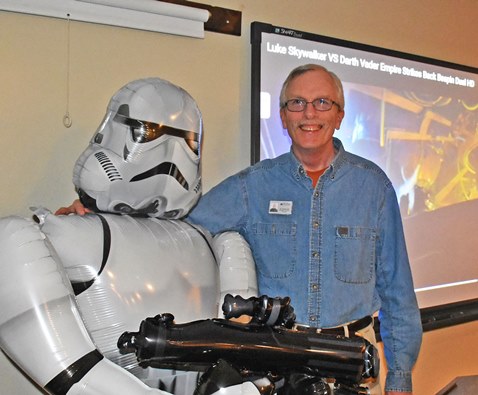 If you were to sum up the career of retiring Kansas City Kansas Community College instructor Tom Hall in just four words, they would be “He made a difference.”

A veteran of the Vietnam War he thought needless and unnecessary, Hall channeled his anger into a lifetime of helping others and particularly veterans coming home suffering with post-war trauma and young people dealing with drug and alcohol abuse. The list is long and nearly endless.

Once out of the Army in 1971, Hall developed and ran rap groups to address the emotional and psychological issues of Vietnam Veterans refusing to approach the Veterans Administration (VA) for services. That came while he was earning a Bachelor of Arts in psychology in 1975 and a Master’s in Counseling Psychology in 1976 from UMKC. He would add a doctorate in education: curriculum and instruction from UMKC in 1998.

His influence in the workforce was immediate starting at O’Hara High School where he developed innovative programs in the areas of addictions, grief, depression, sexuality, divorce adjustment and career guidance. As a volunteer to the National Council on Alcoholism, Hall developed a “How to Cope” course and wrote the curriculum on how it should be taught. While at Bethany Medical Center in KCK for four years, Hall initiated and assisted in development of a family-oriented outpatient therapy treatment center for services for chemical dependencies.

In 1984, Hall began a series of positions administering and delivering mental health and substance abuse counseling services starting with a four-year stint at the Inpatient Alcohol and Drug Treatment Center in Kansas City, Mo., then another four years at DeLaSalle Education Center, and two years at the Industrial Rehabilitation Center where he was clinical supervisor.

In 1994, he returned to DeLaSalle where he served as assistant principal for assessment and instruction of special programs providing substance abuse counseling to more than 500 students for two years and another two years as assistant administrator of Satellites and Family Court Schools where he was a teacher, consultant and trainer for DeLaSalle’s National Center for Children At-Risk. After earning his doctorate in 1998, Hall took on the position of executive director of the Community Back Anti-Drug Tax (COMBAT) Commission for Jackson County where he oversaw the distribution of funds for prevention and treatment programs in the county.

“The job opened up and I applied,” Hall said. “It was an easy transition because Anita Reach had done such a great job in building the program.”

Hall will retire at the end of the current semester in July but in his 17 years at KCKCC, he’s continued to make a difference, working with Ben Hayes in bringing outside training to the campus and helping develop the technology for user-friendly classrooms.

“I started pushing a cart with the technology, now we have smart classrooms all over the college,” Hall said.

As an instructor, Hall will go to great lengths to keep his students involved, even to the point of rising from behind a podium dressed as Star War’s Obie Wan.

“It’s designed to create a space for their voice,” he said. “If I act that way, it’s hard for them not join in and be an active part of their education.” Students will also be asked to call on each other and small group and individual presentations are part of the curriculum. “We must apply teaching, not just lecture.”

“Tom Hall was the type of teacher I would have liked to have had in college,” said Kris Hearn, a former colleague. “He’s a fearless educator willing to try anything to make an impact on his students, whether it was doing something creative or trying new approaches or going to Topeka or the administration to advocate a need.”

“Tom has introduced so many innovations and given the program tremendous stability,” said Anita Reach, his predecessor in the addiction counseling program. “I am sure it has exceeded way beyond what had been done previously.”

While at KCKCC, Hall also served one year as outside interim principal for SETON High School working with young people who had failed at other high schools. As chairman and president of the Board at UCLA Charter School in KCMO, he assisted staff with the development of budgets and curriculum. Hall was also president of the board of Benilde Hall, a 60-bed drug treatment center for homeless alcohol and chemically dependent males, many of who were veterans. Many students in the addiction counselling program have completed clinical supervision and were subsequently hired at Benilde Hall, for which the current executive director is a prime example.

The keynote speaker at the regional Gambling and Substance Abuse convention in Kansas City in 2012, Hall also represented the VA at the NAACP national convention in 2010. He’s also developed and delivered presentations on Suicide Risk and Prevention focused on veterans, initiated a program for college faculty and staff on understanding and working with returning student-veterans and most recently began working with local correction facilities to develop and implement peer-led treatment programs for incarcerated populations.

Retirement will not end Hall’s work with those in need. The founder of the Kansas City chapter of the Vietnam Veterans of America, he’s National Chairman for the PTSD-Substance Abuse Committee for the Vietnam Veterans and makes four trips a year to Washington, D.C., to advocate for veterans benefits.

“Especially those coming back now,” he said. He’s also the founder and first president of the N.E. Gambling Taskforce for Wyandotte County; serves on the advisory board of the Kansas City Veterans Administration; and is a consultant for ArtsTech which serves urban youth.

Hall’s work has not gone unnoticed. He’s twice been recognized as a teacher of excellence by his peers and was awarded a NISOD Teaching and Leadership Excellence Award at the nation convention in Austin, Tex., in 2007. In 2013, he was awarded the John and Suanne Roueche Excellence award for his commitment to student completion and excellence in the classroom.

Since the announcement of Hall’s pending retirement, tributes have flowed in.

“When you look in the dictionary under ‘Change Agent,’ you will see Tom’s picture,” wrote Dave Sullivan, executive director of ArtsTech. “Tom makes lives better for everyone and his ability to engage young people in changing their ‘foolishness’ and being productive is second to none.”

Now the executive director of the Benilde Hall Program, Kent Jewell is one of Hall’s many successes. Struggling with personal issues regarding employment and class scheduling and ready to drop out, Jewell said “Dr. Hall convinced me to remain in the program and was instrumental in introducing me to the treatment facility that I now direct – a testament to his dedication and professionalism.”

“You have been a role model, especially for today’s student veterans, as a guiding hand always willing to help and provide sage advice and counsel to many,” said Thomas Berger of the Veterans Health Council and Vietnam Veterans of America. “Your loyalty towards the college and your pro-active approach went beyond the call of duty.”

Married, Hall and Mary, his wife of 39 years, have a son and two grandchildren and will kick off retirement with a cruise to Scandinavia, St. Petersburg, Russia, and Berlin, Germany.