Window on the West

I was rather disappointed to see in the past week that a bill that would open more public records in Kansas had run into some delays.

House Bill 2555 would have made more information available to the public from search warrant affidavits and arrest reports.

The bill passed the House, and when it was in a Senate committee, amendments took out some of the basic changes it was proposing. Some opposition to it surfaced from some organizations supporting law enforcement and prosecutors.

According to open records advocates, Kansas is one of the few, if not the only state, in the nation that did not allow the public to view these records. I am a member of a group of journalists that is advocating for this change. A change in the law would allow journalists, as well as anyone interested, to see these records.

A House committee received testimony from two residents of Leawood who wanted to see the records when their home was raided by police a few years ago. The couple, who was innocent, ended up in a court fight and had to spend $25,000 to finally be allowed to see the records. In other states, they wouldn’t have had to pay anything other than a small copying fee to see the records.

The proposed bill to open the records suffered a severe setback last week. While the prospect of the bill’s passage this year does not appear very good at the present time, as long as the Legislature is still in session, there is still a chance it may be passed.

Today I talked with Sen. David Haley, D-4th Dist., the ranking minority member of the Senate Judiciary Committee, who said that there might still be a chance for the bill. He said he voted against the changes the Senate committee made to it, and that he agreed with the House version.

“It is my hope that we will reconcile the bill favorable to the House version. Kansas is the only state in the union that does not have the full disclosure or transparency for search and arrest warrants,” Sen. Haley said.

As it is, current law allows for actions to be taken in near secrecy.

“I have heard innumerable complaints,” Sen. Haley said, from people who felt set upon, detained and arrested, for which there was no response, no answer to their questions about why their homes were being searched.

Most of his constituents, unlike the couple in Johnson County, did not have the money or the time off work to go to court to find out why, he added.

The bill as originally proposed in the House would have exempted from the open records certain categories, such as minors and anyone whose life may be in danger.

I have seen a few Missouri arrest reports that go into detail about why a person was arrested, detailing the complaint.  In Kansas, the part of the reports that the public may see usually don’t give very many details. Because of lack of details, it is sometimes hard to gauge the importance of a case, difficult to tell whether a charge for aggravated robbery involved someone walking into a bank holding a shotgun, or was it someone snatching a family pet away from an ex while holding up a fist.

In the past week, we have seen several reports on this topic of open affidavits. One of the best is from KSHB-TV, Channel 41, and is online at www.kshb.com/news/investigators/openrecords.

I think a change in favor of more openness is always a good idea. After many years as a journalist, I believe that more openness is better in the long run.  Opening records and meetings to the public may not always get the result that governments want immediately, but it does further communication with the public. Every time you hold an open meeting or open a record, governments will not necessarily get a result that they are looking for, but in the long run, increasing communication is a desirable goal, eventually leading to more public confidence in government.

Our government can’t be run under a veil of secrecy, and to do so invites the public to be suspicious of it. The public has the right to know what its government is doing. If the other states in the nation can deal with affidavits being open, why can’t Kansas?

Window on the West

The phone rings. “Hello, this is your captain speaking …” plays for the umpteenth time.

Our phone recorder fills up with these sales calls. As so many other people, we often don’t even answer the land-based telephone line any more, unless we see a number we recognize from caller ID.

It never fails that I am in the middle of something that I think is important when the phone will ring and I will stop to see who it is. But it’s usually just another security sales call, “Did you know your home could be the target of a break-in?” or a sales pitch for medical insurance when we don’t need any. “The Obama administration has determined ….”

Automated phone dialers call us during political campaigns with prerecorded messages that go straight to my recorder, too. At one point, I thought we had signed up for the no-call list, but apparently we did not, I am told by someone else at home.

The phone rings again. I look at the caller ID, and it’s one of my universities’ foundations calling. They’re allowed to call for donations. I know right away that they want a donation, because that’s all they have ever called for in the past. I want to tell them, sorry, I can’t give you any money this year because I don’t have enough right now, but instead, I decide to just let the phone ring and not answer it. When I don’t have the money, you don’t get the money. They will just have to wait until some other time for that tiny donation. Sorry, alma mater.

It’s not that I am totally against sales phone calls. I myself make some non-sales calls by telephone for information, sometimes to people I have not met before. Those are different, I reason. I am seeking information, not money. Research and polls are exempt from no-call rules. But I can see how a small business would be hard-pressed to do without sales calls by phone, as start-up businesses sometimes do not have the money to send letters or postcards to potential clients. Businesses are allowed to make sales calls to their own existing clients. Of course, I have always thought a print ad in a newspaper would be more effective, less likely to disturb the potential customer.

The first time my cell phone received one of those prerecorded sales calls, I was very upset. One reason for being upset was the cell phone was always a good way to miss out on sales calls. The other reason, though, was the billing of the cell phone was set up per phone call minutes (not currently my plan), and could result in me paying for a call I did not want. Roto-dialers, I have heard, are not allowed to call cell phones.

I was not surprised that the Kansas attorney general last week said the top complaint of 2013 was violations of the No-Call Act. He reported filing 17 enforcement actions in 2013, and there is a bill in the Legislature to prohibit sales calls to cell phones.

One Kansas City, Kan., resident recently told me she, like almost everyone else, doesn’t like the sales calls. She is on the no-call list and still gets them. Now she even gets them on her office phone. She’s punched in a number to be put on the caller’s no-call list, but they just call her again anyway.

This time, the phone is ringing again. Wait a minute, the recorder is saying someone is going to give me $2,000 of free groceries? All I have to do is sign up for the plan?  But I don’t answer the call. Too bad, I’m past the point of believing it. 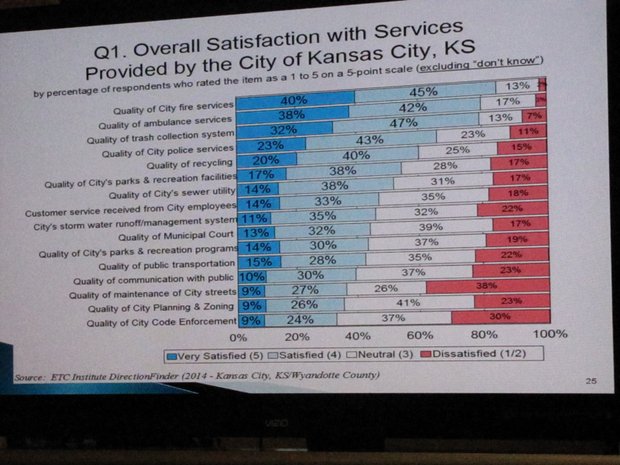 Satisfaction with city services was shown on this chart from a citizen survey.

In a meeting Saturday at City Hall, commissioners heard a variety of information that may help them sort out their budget issues and make hard decisions on cutting and funding programs.

Topping their list of budget considerations was holding the property tax level. At the same time as holding down the property tax, they will be trying to increase the UG’s fund balances. They learned Thursday night that one of the ratings agencies, Moody’s, may decrease their bond rating if they do not increase the fund balances. A lower bond rating could lead to increased spending in the future on debt service. Another bond rating service, S&P, has given the UG a higher rating than Moody’s.

On Saturday, commissioners also discussed being on the hook for a new $25 million radio communications system approved by a former UG commission. Those funds have already been spent and the payments will come from the county side of the budget, they were told.

The commissioners are discussing their budget priorities and will present them to the administration on March 20.

New Administrator Doug Bach thanked the commissioners for their ideas and said at the end of the lengthy meeting that it appears that the first priority will be to cut $1.3 million out of the operating budget, given the commission’s priority to hold down property taxes.

Mayor Mark Holland suggested targeting overtime and out-of-class pay to hold down costs. The UG is spending $6.5 million in those costs, the budget director reported.

Those funds could be used to help pay for the increased fund balances and also for the new radio system, according to UG officials.

Mayor Holland also remarked that perhaps valuations would go up, while the mill levy would be held steady.

The mayor has supported increased data-driven decisions to find efficiencies.

Commissioners are delving into budget details through several committees.

Commissioners are studying the budget requests from the community in detail, going over them in a committee.

A citizen survey presented Saturday by Chris Tatham, executive vice president of ETC Institute, will help the commission rank these requests according to the priorities listed on the survey.

Citizens are most interested in better streets, according to the survey, but in recent years, the UG has cut the funding for street maintenance.

Other priorities listed by the survey, for improving city services: code enforcement, communication with the public, public transit and police.

The three most important community issues included safe neighborhoods, schools and jobs.  There was also strong support to do more to promote economic development, the survey found.

The budget is still in the discussion stage, and none of it is final. The commission began studying the budget months earlier than it did last year.