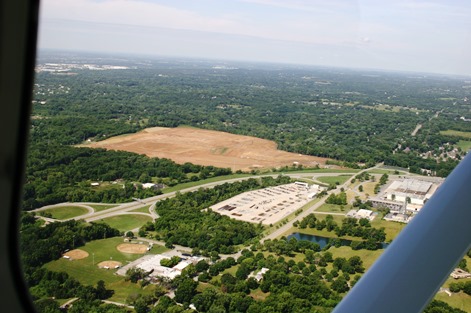 It was a blessing in disguise.

About three years ago, Macy’s department store came looking for a major distribution center. Representatives considered the 130-acre site just south of the Turner Diagonal at Riverview Avenue. The agricultural property had long been considered a development site for various projects, including moderate-cost housing.

Macy’s rejected the site. Fast-forward to today. The site, now identified as RELP Turner LLC, will become a major distribution center for Amazon. It would employ about 1,500 persons and is considered very significant by folks who watch development. A building would cover 856,000 square feet.

The Unified Government confirmed on Monday afternoon that the new tenant would be Amazon.

The Unified Government Commission approved $310.5 million in industrial revenue bonds Thursday, June 9, to help finance the project. The owner of the site will be USAA Real Estate of San Antonio, Texas. That company has its roots in an insurance company, which caters to military personnel. The developer who would handle construction will be Seefried Properties, which has offices in Atlanta, Ga., and Dallas, Texas.

But there is much more. Public and private leaders envision this 130-acre site as a keystone to an industrial area that would cover some 670 additional acres and stretch from State Avenue to about 65th Street.

The Kansas Department of Transportation will award a $7 million grant to build a signalized intersection to help traffic in and out of this initial location. However, the Unified Government hopes to attract a federal grant from the U.S. Transportation Department for $13.48 million for roadwork that would enhance nearby sites. Business West sent a letter of support, urging U.S. Transportation Secretary Anthony Foxx to approve the grant.

Wyandotte County suffers from a lack of industrial sites. This effort would address this deficiency, according to Greg Kindle, the president of the Wyandotte Economic Development Council.

A promotional brochure citing the needed roadway improvements states that thousands of jobs could be added to the community by “unlocking developable land currently hamstrung by overbuilt entrance and exit ramps.” “Interested developers with significant financial assets are ready to go to work building facilities…” Kindle is optimistic about receiving the federal grant that would be part of the TIGER program—Transportation Investment Generating Economic Recovery. Kindle said Wyandotte County has the right demographics for such an award.

Distribution center jobs do not pay particularly high wages—usually about $15 an hour. Kindle said that he would hope that future sites along the Turner Diagonal would attract manufacturing jobs that would pay higher wages.

The attraction of the Amazon fulfillment center shows the changing trend in retail sales. Walmart is the largest retail business in the world doing $482 billion in sales in 2015 compared to Amazon doing only $107 billion for the same period. However, Amazon doesn’t have any stores; Walmart wants to go after that e-commerce market. In 2014, according to an article in e.marketer.com, some 63 percent of U.S. households ordered something online.

Retail experts point out that many consumer products are manufactured in Asia and shipped by sea from the Pacific Rim to the West Coast to ports such as Long Beach, Calif. Merchandise is then shipped by rail northeastward. The goal is to have enough warehouse space at various locations to meet the demand of a two-day, or less, delivery time.

Kindle said he expects NorthPoint Development to play a significant role as other areas along the Turner Diagonal are developed. Brent Miles, a former president of the Wyandotte Economic Development Council, is now a NorthPoint vice president. He played a very significant role in first obtaining the initial site on the Turner Diagonal and then selling it to USAA Real Estate. Miles and NorthPoint are active in redevelopment efforts in the Fairfax Industrial Area.